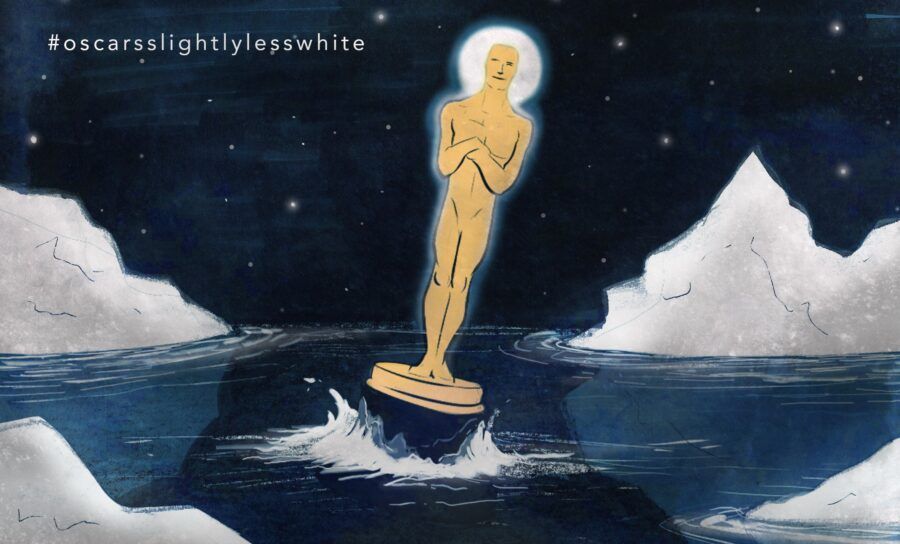 February 26th is the night of the 89th Academy Awards show. In 2015 and 2016 viral boycott #OscarsSoWhite – started by April Reign – stirred up a lively debate on whether or not the Academy of Motion Pictures Arts and Sciences is honoring the rights of all races and ethnicities equally. Reign and the social movement that followed her lead, meant to point out the obvious and continuous lack of black nominees. It was argued, that it reflected the current racial stratification issues in America – the subject of at least three nominated films this year. On top of that, this year’s travel ban project has enraged the film milieu and caused a choir of film people to express their repudiation.

Last year’s discussion between the Academy and its guests outran a simple, meta, ‘mainstream players’ against ‘independent thinkers’ conflict. Thus, this year’s Oscar predictions – traditionally concerned with winners and losers of the competition – will also involve the nature and impact of political activism that might become the unofficial but leading theme of the filmmakers’ big night out of 2017.

CINEMA AND DISOBEDIENCE – IVORY OR EGGSHELL?

Cinema cannot be found among the nine Muses of the greek mythology – like e.g. poetry, music and drama. I imagine her portrait less classy than than the originals, as if she was still going through a teenage Muse rebellion. There could be fractions of many different characters in her: a greedy villain, impressionable teenager, compassionate intellectual, impatient storyteller. She would be the one who gets into the middle of every debauchery and – most charming of all – would also have a gift of laughing at her own expense. Like any art, cinema is grounded in creative liberty. One of the big differences – famously director Stanley Kubrick’s favorite – is that it can tell stories faster than most other arts. Hence, it is quicker to respond and silver screen loves its quick-witted rebels. Marlon Brando, Michael Moore and Jane Fonda – there have always been a few off-screen actors or filmmakers (especially from the documentary genre) who publicly showed their defiance in reaction to events of the day.

Academy of Motion Pictures Arts and Sciences was founded in the 1920s to keep the unions away from the studios. The elite of film industry insiders were to deal with the unregulated matters of labour within film. In the early years, the Academy’s most influential members were the big bosses – the studio executives (in other words: heads of the studios like e.g. Universal, Paramount, MGM) These were the times of The Great Depression and there was an attitude of hostility towards the Academy from the actors and directors who started protesting and organizing into guilds. Yet in 1935, talented and striking Italian-American director – Frank Capra – became the new president of both the Academy and the Directors Guild at the same time. He decided that from that point on the Academy would not take any role in managing labour or religious and political issues in film industry. Instead Academy’s focus was supposed to turn exclusively to the artistic quality of the emerging movies.

83 years later we see that Frank Capra – despite promise of fairness – did not protect us from the political controversies to come. Namely, the total of zero nominations in the last two years for the black actors and actresses and – in the big picture – only 30 out of 859 since the beginning of the award show in 1929. In contrast to that, in 2017 a record number of seven out of twenty performance nominations were awarded to people of color. Furthermore, three out (of nine) best picture nominees: Hidden Figures, Moonlight and Fences, and three (out of five) feature length documentaries: ‘I Am Not Your Negro’, ‘O.J.: Made in America’ and ‘13th’, are built around black life and the subject of race stratification in the US.

Regardless, this year #OscarsSlightlyLessWhite is trending. Statistics made by The Economist compared the total population of America to total received nominations divided into racial categories. The data had been collected since the beginning of the 2000 until last year. It showed that 13% of American population is black and it is certainly improbable for them not to score a single nomination within acting. Not to mention, two years in a row. Academy Awards turned out to be unacceptably white for more reasons though. Only 3% of nominations have gone to hispanic film professionals while 16% of American citizens are Latino. The Asian-American population amounts to 6% and they have received just 1% of the nominations. Regrettably, I did not find statistics about how many people of each race work in the film industry. In a way, it is sad that such graph is needed for anything.

Academy took responsibility for their past. It is true that the 2017 nominations are more diverse and this ‘cosmetic change’ is expected to be followed by a structural one too – as promised by the Academy’s president. However, the Academy is not fully responsible for the film industry’s thinking that it is less profitable to make films that are carried by actors who represent minorities. Yet, the Oscars do have the power of influence and remain the greatest boost any filmmaker can get to their carrier. Hence the Academy’s buckling is a success. Transformations are being enforced in the structure of Academy’s members. (Another statistics from 2014 made by LA Times showed that this elitist group of consisted in 93% of white people, 2% black people and less than 2% latino. 76% of all members were male and the median age was 63.) Academy’s president promised to double the number of women and increase its general racial diversity. The 2016 boycott showed that the Academy can go into a discussion, step up their game and thus poke the whole old-fashioned film industry. Yet, can the Oscars have influence over anything that is not economically dependent on them?

“But if we live through this precarious moment – if his catastrophic instinct to retaliate doesn’t lead us to nuclear winter – we will have much to thank this president for. Because he will have woken us up to how fragile freedom really is.” Meryl Streep (Human Rights Campaign 2017 speech)

Public speaking in front of a vast audience is testing people’s vanity. Practically, every year during the Oscars, there is at least one fight picked up by either the hosts or guests of the award show. This tendency manifested itself very well in 2003, when Michael Moore was famously booed out for openly rebuking president Bush for his decision to invade Iraq. Afterwards, he endured months of harassment wherever he went and narrowly avoided getting shot. This situation is hard to imagine. To paraphrase Moore himself: There are two words that each Oscar winner hears after descending the stage. First one is ‘Champagne?’. Second one is ‘Mint?’. And, my third was: ‘ASSHOLE!’ – screamed right into my ear by an enraged stage manager.

Meryl Streep’s unyielding voice of political disobedience on this year’s Golden Globes – awards traditionally hosted by Hollywood Foreign Press Association – opened the floor for a new debate. First of all, she called out president Trump for his cruel impersonation of a reporter with disability – calling it bullying. Secondly, she invited film people to protect and stand by the press. Thirdly, she analyzed the responsibilities of an actor and filmmaker and the biggest one of them – she pinpointed – is the ‘active empathy’.

If we think about it, what is the meaning of a responsibility of an actor or actress? As far as I understand, it can be compared to growing up and discovering that you will never be really liked for the acquiescent person that you might feel it is appropriate to be. The real appreciation will start with your own claim to love who you love, to be passionate about what you are passionate about and to take pride in respecting your position in relation to other people, while also respecting them. Knowing that this version of yourself deserves a place to be and acknowledgment is real freedom. It is an idealistic freedom. It is a freedom of arts and stories. One where we can give voice to all characters – even those that have never been – and thus, grant people in the audience possibility to access what they do not know about themselves.

When #OscarsSoWhite blossomed film people did not all agree that Academy is to blame, but the great majority united in support of taking the industry by the hand and onto a path of more equal possibilities for everyone. In 2003, when Michael Moore went on stage to accept the golden statuette and show his colours, all the documentary nominees got up and stood right behind him. The travel ban failed but was not discarded. It remains Trump’s current pet project and its specter is hanging over the heads of people from countries with Muslim-majority. In consequence, it looks like Hollywood will unite this year under the banner of humanism and liberal political activism. Iranian director Asghar Farhadi (who won an Oscar for ‘Separation’ and is nominated to the best foreign picture Oscar 2017 with the movie ‘The Salesman’) won’t be attending the awards show in protest. His collaborator – the actress Taraneh Alidoosti – decided to do the same. This year’s Oscars carry a promise that some of the richest people in America will take a stand and express their discontent for the oppressive power. Going against the privilege of staying in the safe, drowsy cosiness of one’s home is difficult. We can also assume that not all will agree. Not all will speak up.

Oscars are a display of the fact, that the wealthy can get their voices heard more easily than the others in the contemporary democracy. This can take more of less trust inspiring forms. However, leaving the judgement of whether this situation is just or unjust aside, we can think about whether it could be healthy to get to know the beliefs of those who are telling our stories. There are reasons to reflect on what will be said. We need to owe up to the fact that what the actual job of an actor is, is to understand the underlying humanity of any given character. Every time they learn about a new role they need to use their empathy to find a ‘key’ to the personality. The key is the person’s inner motivation for doing the things the way they do. When that inner voice becomes obvious an actor is able to leave the shell of his or her own being behind and recreate themselves as new people who still remain believably human.

It made my mind stumble and my heart shake, when I heard Meryl Streep share her reflection on acting in 2009 with the words: ‘You have everybody in you’. This is hopeful and devastating, both politically correct and the total opposite. Depending on how you choose to interpret it. Some people claim that it is narcissistic and false to say that you can understand a problem that you have never been through. Yet, I cannot help but disagree. My theory is that addressing our common basic emotions: anger, contempt, disgust, distress, fear, guilt, interest, joy, shame, surprise, we have a capacity to imagine or somehow co-experience the inner world of anyone in whatever situation. Yet, it does not mean that this capacity is always functioning at its best (see Trump) and that it should not be trained. This is what actors’ job essentially is. While competitions like Oscars prove that the skill of wearing someone else’s skin comfortably comes in many levels of proficiency.

We can definitely expect this year’s ceremony to take a political turn and it will be interesting to see to what extent the muffling of freedom in America will unite the film industry in defense of their art of compassion.